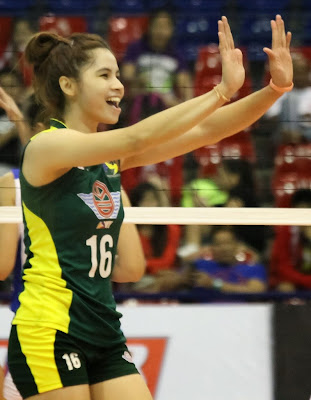 Early leaders Cagayan Valley Rising Suns and TMS Army Troopers will try to stay undefeated in the Philippine SuperLiga Grand Prix as they face each other on November 15 at 2pm at the FilOil Flying V Arena in San Juan.

It is the same case in the men’s division as opening day winner PLDT MyDSL will collide with Giligan’s for the right to become the first team to reach its second victory. In the other women’s division clash, Cignal and Petron are targeting to get a notch in the win column after dropping their respective initial encounters.

The Rising Suns will bank on the frontline of Wanida Kotruang and Sandra delos Santos as well as the experience of Pau Soriano and Aiza Maizo-Fontillas. On the other hand, Jovelyn Gonzaga and Jacqueline Alarca will be at the helm of the Troopers with Wanitchaya Luangtonglang helping them out.

With only two days to prepare, TMS coach Rico de Guzman admits that they are still making adjustments especially with his reinforcements.

For the champions to go 2-0, de Guzman cited the importance of having an experienced setter as well as a libero that can receive properly to make things easier to set up the offense.

In the men’s side, Speed Boosters mentor Francis Vicente hopes to continue to build the momentum of their 25-23, 25-23, 25-22 win against Systema where Richard Gomez and Kheeno Franco led the way.

Since this is the first men’s division tournament, Vicente is not leaving anything to chance as he plans to gather as much as information as he can about the other teams.

“I asked the PLDT management to tape the games para mabasa namin,” he shared.

Frank Mauricio of the Sisig Kings, meanwhile, only has two days between his first two games as his wards’ conditioning will be tested.

JP Torres and Salvador Depante III are expected to step up for Giligan’s.

Finally, Petron plans to recover after succumbing to the Rising Suns on Sunday. Dzi Gervacio and Tanaka Shinako were the few bright spots in the Blaze Spikers’ first match.

In the other end, the Cignal HD Spikers were bested by sister team PLDT in four sets. In that contest, it was the Chinese duo of Xie Lei and Li Zhanzhan who delivered for Cignal. Still, more are expected from former De La Salle Lady Spikers Michelle Datuin and Maureen Penetrante-Ouano. –JP Abcede